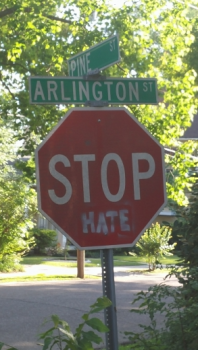 If you travel around the neighborhood in the Belhaven area of Jackson, you will notice graffiti stenciled on the stop signs at intersections.

“Hate” is the word that has been stenciled on the stop signs. Put the two words together and it says “Stop Hate”. Whither the vandalism was done by students, residents of the community, or outsiders from with in Jackson is a mystery.

Since reaching out to the Clarion Ledger to report about the vandalized road signs, I have done some researching. There is a website that uses a depiction of a Stop Sign with Hate spray painted on it. Whither whomever got the idea from this website and the people responsible condones disfiguring city property, or it was a stand alone act by the individual or individuals is yet to be determined.

Graffiti of this nature has been found in other parts of the country with classes at the Missouri University canceled in relation to the graffiti. The City of Jackson should do something to clean up the defaced road signs as crimes of this nature brings more serious crimes to neighborhoods that once was safe.

Penalties for Malicious Mischief in Mississippi:

Decree from Federal Supporters Sent to Schools Across the Nation »